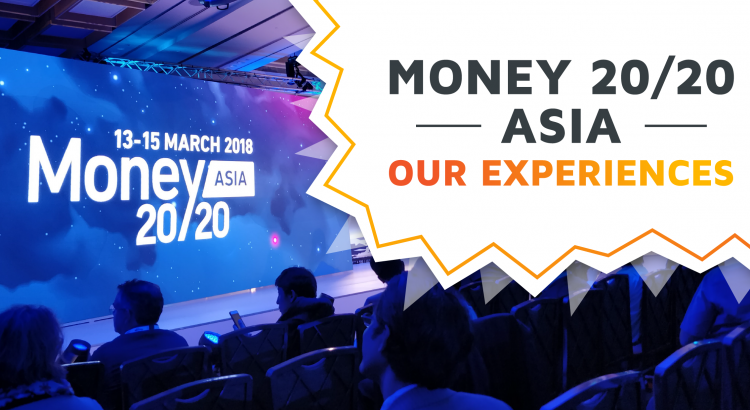 Global finance is not measured in Dollars and Euros only. The Asian Nations are driven to take the lead in technology. They invest in artificial intelligence and robotics, in fintech and mobile payment. Backed by vast economies like China, India, and Japan, Asia will play a major role in the financial area. A clear sign of this growth is the existence of financial conferences popping up all over the Pacific Area. Money20/20 Asia 2018 is the most recent addition to this well-filled list.

We have already spoken about two of them here: Hong Kong Fintech Week and the Singapore Fintech Festival showed us what’s on the horizon for Asian finance.

But we wanted to make it three — only fitting to our company name of trimplement.

In March 2018 we attended the very first Money20/20 Asia conference at the Marina Bay Sands in Singapore. And it was quite different than our two other trips to this part of the world.

When thinking about travelling to Singapore — a good 10 000 kilometers distance — we could not help but feel a sense of adventure. We imagined the city-state being an exotic place. A wave of foreign customs would immediately overwhelm us, we were sure.

And we indeed spotted a few “oddities”:

Yet, taking all into account, Singapore turned out to be quite familiar: Different trees, higher buildings. But all in all it resembled a Western metropolis. Or it would if our cities were just as clean — beyond any doubt, Singapore was the cleanest city we have ever been to.

It surprised us to see how widespread and low-priced technology is in Asia — at least when compared to the rural areas of our homeland Germany. A SIM card with 100 GB of traffic for example only costs 15 Singapore Dollars (approximately 10 Euros).

Our team members took 4 flights from different locations to Singapore. After having arrived one day before the conference opening, we stayed all in the same place — a clean, modern family hotel called Hotel Bencoolen. It was not located on Bencoolen Street however, but on Hong Kong Street, which led to a little confusion.

Hong Kong Street itself lived up to its name. It lay within walking distance of China Town, where we spent a few hours after arrival. The remains of day one we spent sightseeing near the Marina Bay Sands Hotel. An architectural masterpiece and the location of the Money20/20 Asia 2018 conference. As you would expect, we had a good view several bank buildings nearby, all of them balancing on the thin line between classy and gaudy.

Being true Money20/20 veterans we were curious about how this specific “brand” of fintech conference would play against a South Asian background. As it was the first Money 20/20 event in the most relevant Asian fintech hub, we expected it to be huge. But the Singapore factor didn’t make itself felt — Money20/20 Asia 2018 has been the smallest Money20/20 conference we have attended so far.

For our purposes, it has been the most “spread out” conference, too. Most meeting and conference rooms were situated in the basement. The same was true for the lunch, recreation and networking areas. Thus, very little passing trade reached us or the other companies at the exhibition areas above.

In a way, that was only fitting: Money 20/20 Asia 2018 chose the empty reaches of outer space as its design theme. The conference rooms were named after celestial bodies, like Sun or Moon. The main stage went by the evocative name Universe… And that was about it. Little had been done to get the space topic across visually as well. Reminiscing about the marvelous comic book theme at Money20/20 Europe 2017 in Copenhagen, we missed a little enthusiasm here.

However, such slight neglects didn’t dampen the mood all too much. The conference was perfectly organized. A legion of ever-friendly staff members stood ready to lend a helping hand or give directions whenever necessary. And the food at the lunch area was excellent and completely tagged — no bad surprises here.

All in all Money20/20 Asia 2018 felt quite familiar, if not for a few cultural distinctions. It came to our knowledge that there are many small rules of conduct regarding business cards for example: In many Asian countries, you should hand over your business cards with both hands if you don’t want to come across as rude. As a sign of respect to your Asian business partners, you should also carefully study the business cards you receive. Only after doing this, you may put it in your wallet or pocket.

On the other hand, language problems didn’t occur often. Most Asian business partners had even adopted a Western name, they’ve chosen for themselves.

The area was packed businesses from all over the globe. Unsurprisingly, we spotted some of the usual suspects, we knew from other Money20/20 conferences. Mastercard was there, as well as the German financial service providers Wirecard and the IT company Diebold Nixdorf AG, just to name a few.

AntFinancial, the financial subsidiary of Alibaba, spared no efforts to catch everyone’s attention, maintaining a booth right at the entrance. We also discovered a few companies that we were completely unaware of before. Yet, LianLian Pay caught our attention with equal ease — the company is the fourth largest third-party payment service provider in China, that is not a bank. And yet, we encountered them for the first time.

Old-school payment companies made up the majority of the exhibitors. Yet, blockchain and crypto companies also attended in considerable numbers — despite the fact that the technology didn’t play a huge part in the conference agenda. The feedback to blockchain technology and cryptocurrencies was largely positive, with some notable exceptions.

For example, in cryptocurrencies face high degrees of regulation now. Some Asian companies we talked with stated, that they could not deal in crypto even if they wanted — and they sure don’t. Representatives of the Qatar National Bank coming by our booth also declared they decline involvement in cryptocurrencies.

On the other hand, Mastercard announced a joint venture on the Money20/20 stage, bringing together credit cards and cryptocurrencies. Speaking with company members at the Mastercard Start Path, it became they too approach the matter with care: The offers to pay with a Mastercard from your crypto balance, requires converting crypto to FIAT first. So, Mastercard doesn’t get in touch with cryptocurrencies directly.

The European market presented itself as more inclusive regarding blockchain technology. Switzerland positioned itself especially well: With Crypto Finance AG, Swiss Coin and Monaco, some innovative players on the field of blockchain made an appearance.

Unsurprisingly, with all the crypto enthusiasm in place, our white-label crypto solution CoreExchange was in high demand. Many new ICOs are coming up. The companies issuing them often want to set up their own cryptocurrency exchanges — and that’s precisely what CoreExchange allows them to do.

One of the talks we attended, that’s stuck in our heads, was an announcement of AirAsia regarding their money exchange and expense tracking app BigPay. Founder Tony Fernandez had the audience hooked on his story, how he had bought the bankrupt company for 25 Cents back in 2001. Now it’s one of the leading airlines in Asia and the first there to employ women as pilots — one of them a former Miss Thailand.

Being used to actual tables and booths at the conferences in Las Vegas and Kopenhagen, we had to get used to our Money20/20 Asia 2018 display: A small, open kiosk in the corner of a large exhibition hall.

Consequently, it was not easy to hog the limelight at Money20/20 Asia 2018 — especially, as we shared the kiosk with three other companies. Each one of us occupied one side of the foursquare layout. Every side included a small table on top of a tiny cabinet and a wall for promotional imagery. This setup taught us a few lessons regarding promotion and networking.

One of the highlights at former Money20/20 conferences been the unique parties during the second evening. Kopenhagen basically gathered us around the fire for a few drinks, while Vegas invited everyone into a club to witness a performance by Ne-Yo. Instead of R’n’B stars, the stars in the sky were the at the Money20/20 Asia 2018 party. The event took place at the Cé La Vi Club on the 57th floor of the Marina Bay Sands, offering a stunning view of the city’s skyline.

Unfortunately, not all of us could attend the party right away, although we had registered. There were simply not enough wristbands for everyone. So we stood in line before re allowed to enter. The cocktail handed to us at the entrance was worth the waiting time though: a  Sling, very recommendable.

The party went on from 9 PM until 2 o’clock AM. Plenty of time to watch the fintech and payment crowd perform their best dance moves. And some of them really cut up a mean floor — breakdance and backflip moves included.

Boarding our planes home, we looked back at three days packed with business opportunities. For us, Money20/20 Asia 2018 wavered between well-known routines and completely foreign business mentalities and situations. If you have a company that specifically targets the Asian market, it’s really a go-to conference, as it might be easier to find one’s way around it than at other Asian conferences like Hong Kong Fintech Week. In addition, you don’t have to go without “familiar faces like Mastercard or AirWallex. Indeed, the European big player’s did make quite an appearance in Singapore.

Would we go again? That’s not a question we can answer at this stage. Overall, we came back with a better feeling than when we traveled to Las Vegas — but that feeling has to convert into solid partnerships first. But we will keep you in the loop on this. And then, there is still a new Singapore Fintech Festival to come. We might smell those durians again, sooner than we can stomach.

We also look forward to talking business with you, if you are in need of a software partner for financial software. Contact us at info@trimplement.com for more on this. You also find us on Twitter, LinkedIn, and Facebook.