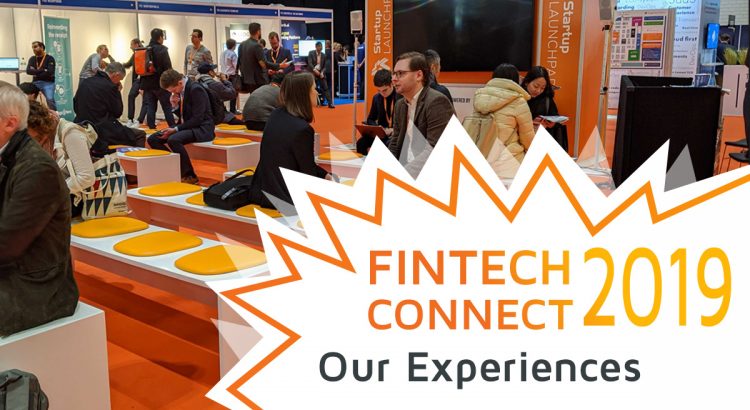 When you are browsing the net for a list of attractive fintech and banking locations around the globe, you will surely find London at the top end. It’s not only where Big Ben shakes its clapper but also where Big Tech and Big Finance shake hands.

A few weeks ago, we set out to the capital of the UK to do very much the same, to network with the European fintech scene and present our software products and services. The occasion: The FinTech Connect 2019 conference.

To state it right away: The connection buildup proceeded well, but not without a few issues. Time to give FinTech Connect 2019 a run-down.

Failing to prepare means preparing for failure. Thus, planning for a smooth trip and the hustle-free assembling of our booth was the top priority in the early stages of preparations.

Luckily, we faced little obstacles here. London is just a one-hour flight away from Cologne, Germany, where our headquarters lie. Once the organizers confirmed our participation we estimated our efforts and set priorities. FinTech Connect’s online Exhibitor Portal proved a valuable resource here. It presented a checklist with tasks for exhibitors to complete, such as deciding the text on your name-board or ordering additional furniture or electrical outlets.

That leads us to a major point of criticism: being in the FinTech Connect e-mail loop also had an unexpected downside. The name and email of every exhibitor stood on the floor plan shown on the homepage. We presume that these public mail addresses propelled the wave of spam emails that hit us soon after. The spam cajoled us to buy lists with FinTech Connect participants – not the kind of “business offering” we were looking for.

Regarding marketing materials, we had most of them printed directly in London. It then was delivered to our hotel for pick-up after arrival. This had turned out beneficial for us during other conferences, as it allowed us fast and light travel. However, for our roll-up banners, we had to refrain from the practice a little.

Having arrived in London, at the Ibis Hotel, we were staying in, we geared up. Boxes full of trimplement product folders and giveaways were already waiting at the reception. Fortunately, our hotel provided us with a trolley for easy transportation to the conferences’ location – just a short walk from the hotel along the marina.

We were also surprised to see that most of the nearby hotels did not raise their prices. It’s a practice we experienced during conferences in other cities.

Upon arrival, the mood of the location at the Royal Victoria Dock instantly captured us. Old dockland cranes, stretching their jibs towards the sky, stand right next to modern glass buildings. A fitting panorama for fintech, which joins long-established financial mechanisms with disruptive technologies.

A small downside was the noise disturbance. The Royal Victoria Dock is located directly under the air corridor of incoming flights of London City Airport. From 7 AM onwards, you could clearly hear the approaching planes. But fortunately, it was not as obtrusive as it could be.

FinTech Connect 2019 only took up a small portion of the interior of the ExCeL, which is short for Exhibition Centre London. Aside from vast function halls and buildings, the ExCeL grounds also encompass outdoor seating accommodations and a high variety of places to eat.

Especially the later was much appreciated by us. In contrast to several other fintech events we have attended, no free refreshments were given out to exhibitors – with the sole exception of wine and beer to click glasses at the end of Day 1. We would have appreciated access to water dispensers at least.

One of our first tasks after entering the ExCeL was a delivery. A pile of computer mouses with our logo expected to find new owners as part of the FinTech Connect incentive program. The organizers gave exhibitors the opportunity to hand in promotional gifts to be displayed on the FinTech Connect homepage.

The gifts were free to take, however. Instead, visitors could buy them. Not with actual money, of course – though Fintech Connect staff threw the term “money” or even “cryptocoins” around a lot to explain the principle. Rather, every exhibitor got a card with a QR code. The visitors could scan the codes at the booths to top-up the visitor’s bonus point balance. Later on, those bonus points could be exchanged for prizes from the gift shop.

The booths of all companies who sponsored said giveaways booked double the amount of bonus points on visitors’ accounts. Thus, the organizers of FinTech Connect 2019 created incentives for eager collectors to drop by at these booths, which appeared prominently marked on the exhibition hall maps.

In hindsight, it’s difficult to say to what grade this resulted in more visitors at our booth. What we know for sure is that our branded mouses ranked among the most popular prizes. We didn’t have to take even a single one back home. If your company has the opportunity to sponsor giveaways for a conference event, carefully choose the type of product. Ideally, the giveaway should meet two criteria. First, it should be useful, so that the owner is taking it out often. Secondly, it should be easy to use, especially in public, which increases the exposure to one’s company logo in the public. Thus, the advertising effect rises. Exuberant design choices are not necessary.

The same goes for your choices in designing your booth. During FinTech Connect and other fintech events, we realized that conveying a clear message is the single most important factor. Upon the first gaze, the visitor must understand what your company and your products are about. What your business case is. How your customers will benefit. Then you don’t necessarily need an elaborate booth layout. It certainly helps to make your company “pop”, but you should never sacrifice clarity for sheer surface.

FinTech Connect 2019 drew more than 6000 attendees from 81 countries to the ExCeL. And having been right in the thick of it, we can confirm: Especially the first day of the conference was well-frequented. Make no mistake, FinTech Connect 2019 still operates on a much smaller scale than, say, Money20/20 Europe.

Yet, the conference has embarked on a course for growth, in its fifth year. The organizers already announced FinTech Connect will move to a bigger space in the ExCeL in the coming year. In addition, they are planning the first international FinTech Connect off-shot, taking place in Toronto. During day one, FinTech Connect employees already encouraged exhibitors to commit themselves for the coming events, at a discount. For us, being there for the first time, this question came up way too early. We first had to see how the event would unfold.

Day One, for starters, did play out well for us. Our booth saw a fair share of visitors and potential leads. Aside from our wallet, payment and virtual account management product CoreWallet and CoreExchange, we also took the opportunity to promote our joint ventures. Being in London, the conditions to talk about one of our businesses which we expect to start trading in 2020 in Great Britain were perfect. But also our art & blockchain project Value Manifesto, the first crypto multiple, attracted wide interest. Matthias even had an interview with IBS Intelligence about our company.

The second business day at FinTech Connect 2019 began a lot quieter. Until mid-afternoon, the overall number of visitors did not match those of the day before.

Natallia used the relative quietness of the day to attend the panel discussion “Beyond the Gold Rush – How to Survive the Digital Assets Wild Wild West?”. There, Dotun Rominiyi of Emerging Technologies LSEG, Thomas Borrel of CPO Polymath, Shobhit Maini, Senior Vice President of Markets & Securities Services Citigroup, and Lory Kehoe, the Managing Director ConsenSys, argued about Security Tokens, FCAs and a new wave of regulation turning the crypto scene on its head. One of the important questions: How do regulations apply to crypto products and in which cases? For example, hard-forking an Ethereum chain results in two chains with duplicate tokens – would this mean that they would also be taxed twice? Not an easy question to answer, as technological factors may not be left out – which they often are.

If you have expected a thrilling high-noon duel between regulation proponents and opponents, you were bound for disappointment. The new sheriff in town is called Regulation and no one did object much to them. Natallia actually wondered at the consensus on the panel, regarding the role of regulation in crypto. The participants in the discussion embraced the constitution of new regulatory obstacles. That’s a position very unlike the one the vivid crypto scene has adopted, preferring a minimal amount of regulation necessary to counter fraud and scam. Indeed, the key benefit that Blockchain has over other technologies lies within its processes of decentralized self-regulation. Therefore, regulatory undertakings should aim for the middle-ground between those two extremes – an argument that fell a little short during the talk.

The rest of the day we spent in pitches and networking efforts. These efforts mostly confined to chance conversations at our booth, as the official FinTech Connect App offered no viable matchmaking system for spontaneous meetings. What it did offer was a huge contact list with businesses. But this list lacked functions to filter the entries by sector or make offer/search requests.

Before getting back to Germany, we spent a nice third day in London. For business reasons, of course: We met with our British business partners to discuss a joint venture outside the conference. The restaurant we came together in deserves a recommendation: The Gunmaker’s House near Baker Street served tasty food in a quiet interior – ideal conditions for business meetings.

After saying farewell to our partners, we got ourselves ready for our trip home. Realizing British waiting lines at London Heathrow Airport Security are much longer than in Germany, we had plenty of time to ponder over what we had experienced at FinTech Connect 2019.

All in all, we have seen less of the FinTech Connect conference talks than we would have liked to. But for the best possible reason: There has been a flow of visitors to our booth, constant enough to keep us talking. Hence we went back home with a respectable pile of business cards and more than a few leads. In the same vein, we have been proper targets for headhunters and entrepreneurs trying to sell us their products and services – give and take.

So, looking back, we would say it has been an interesting and fruitful week for us at FinTech Connect 2019. There are still a few issues the organizers would have to focus their attention on, namely the organization around the exhibitor badges and the reduced functionality of the official app. Even if the organizers tackle these problems, FinTech Connect still has a long way to go.