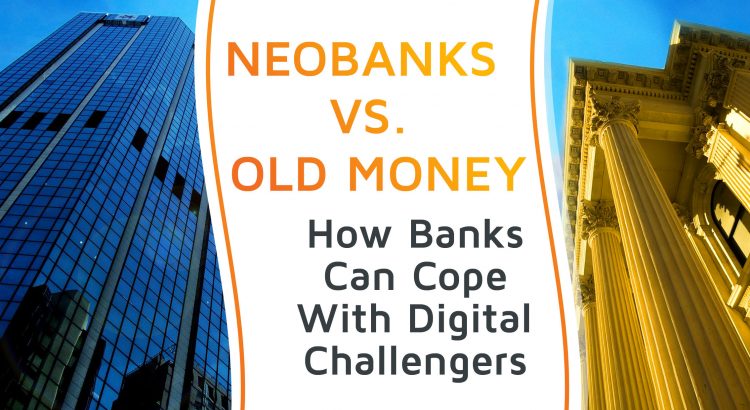 Times change. We thought we had already seen the Last Unicorn in the 1980s. But in the finance industry, the unicorns are alive and well. And what’s more: They keep multiplying. N26 is one of the latest additions to the herd. The German company acquired more than 300 million dollars in its most recent financing round. Now N26‘s company value is estimated at 2.7 billion dollar.

Good preconditions to shake the digital banking sphere to its very foundations. And the traditional banks? They rely on strategies that were last seen in the 80s, too. Although they have the potential to do much more.

The question is: Do neobanks, such as N26 and or its rival fellow unicorn , pose a threat for traditional banks? Don’t expect a simple “yes” or “no” here. Neobanks have only been around for a few years. Carving out a niche in the banking market is a marathon, not a sprint.

At least, N26 moves at a brisk pace at the moment. For 2019, CEO Valentin Stalf intends to break into the Swiss and US American market. As the N26 management states, their app is downloaded at least 3000 times per day. An exponential increase: Only two years ago, N26 counted only 300 downloads a day.

Now, downloads don’t necessarily equal conversions. But let’s look one step further down the customer’s journey. There, N26 whips out its most distinct advantage.

In traditional banking houses, the physical branch office is the first point of interaction with a potential customer. Opening an account is an elaborate process: Go to the counter. Meet with a bank consultant. Fill in a document. Receive a debit card via mail. Becoming a customer of a traditional bank includes at least some of these steps.

On the other hand, mobile devices present the point of interaction for banks like N26, Revolut or Monzo. This allows customers to be flexible: Their bank is, where their smartphones or tablets are. It’s true that traditional banks offer their own mobile banking solutions. But it’s the neobanks who wholeheartedly embraced the idea of mobile banking without physical branch offices. At N26, opening accounts is as frictionless as registering at an online retail platform. The app uses VideoIdent for KYC purposes. Users simply have a video call with a support staff member and show their ID for verification. Set, match, done.

This approach has one unique benefit for N26 and their customers alike. The customers are grateful for the straightforward registration process, which lets them stay at home. And N26 can be sure that the time between making up one’s mind to become a customer and actually registering as one is very short. Ultimately this means fewer interference factors. The customer can open an account at exactly the same spot where they discovered N26 in the first place. No need to locate a branch office or stand in line for a meeting with a bank consultant.

For me, the branch-free, mobile-only mechanisms of N26 certainly are quite charming, where they work. Yet, in terms of accessibility, they also put neobanks at a slight disadvantage, depending on who you ask.

The Roads In Cash Kingdom

Now, what if you ask the average German customer? They will say that they are mostly satisfied with their banks: More so if they hold an account at a direct bank, less so if they are credit union bank clients. But as experts at McKinsey point out: Credit unions like Sparkasse or Volksbank still benefit from their far-reaching presence. Both banks can rely on a huge network of branch offices. And, more importantly, of ATMs. It’s these three letters the German payment market still revolves around. In our country, cash is still the payment method no. 1 – at least for everyday commerce. Limiting options to withdraw money can render a bank less attractive for a certain clientele.

Unfortunately, this is exactly what N26 does. In principle, it’s possible to withdraw cash from any ATM which accepts the N26 Mastercard. Sounds good, until you read the fine print: Only up to five withdrawals per month are free. If you withdraw money more often, you are charged a fee of 2€ for each such transaction. Given that about 41% of Germans use ATM machines at least once per week, that’s a tight calculation by N26.

Depositing money is even more restricted. N26 entered partnerships with supermarkets and retailers as part of the service Cash26. Customers can pay in money at the counter. This way, up to 100€ can be deposited per month. If it’s more, there comes another fee. Overall, it’s not that much of a dealbreaker, as cash is much more likely to be spent than deposited. But for some customers, like owners of small, private shops, it might be an inconvenience.

In this regard, banking goliaths like Sparkasse and Volksbank have a clear home-field advantage, I feel. They certainly could do better. Paying multilateral interchange fees for withdrawing money from a rival bank’s machine doesn’t rank among my favorite things, for instance – mainly because are not transparent for customers. Oftentimes, they are not displayed on the ATM during the transaction but charged later.

Plus, simply sitting out the challenger banks, gatecrashing the banking party, will not work. N26 and its peers will find ways to address their own shortcomings.

Fortunately for the banks, many of them now see which way the wind is blowing. Old formulas don’t work anymore, the pressure for innovation is high. It doesn’t have to be in-house innovation though. Co-operation with fintech start-ups and SMEs provide opportunities to reimagine banking. In my view, this would be a better move than simply letting fintechs fly under the radar until they suddenly demand account access upon launch as permitted by PSD2 regulations.

Neobanks like N26 concentrate very much on spending and accessing money. But traditional banks have on neobanks in the field of lending and saving money. As I see it, this is where their biggest potential is hidden. Bank loans and building loan financing are only two bank products which are attractive for many customers – if the conditions are right. Platforms like Check24 already compare finance products (and reached unicorn status themselves by that). Banding with insurance companies at this point could be worthwhile, too. The competition never rests: One of the investors of N26 is Allianz, which might inspire interesting hybrid products.

Low friction is the magic word here: Instead of poring over contracts, customers should be enabled to easily grasp the products of their respective bank. Take a look at Scalable Capital, for example. They managed to present ETFs, complex investment products, in a simple way. They made them understandable and thus accessible to customers.

Overall, the applications by the German top banks could be a good deal more consolidated. YOMO, the smartphone-driven bank account by Sparkasse, was developed as a riposte against N26. Fair enough. But it misses its purpose if only a tiny fraction of local Sparkassen support it at launch.

Banks must also learn to use their resources, their network and their reputation to their advantage, while propelling their own innovation circle. At the moment, traditional banks still have the edge. The neobanks have currently 8 million customers in Europe — compare this to 430 million banking users in Europe overall. And despite their growth, N26 and Revolut don’t operate in the black yet.

The future will show whether neobanks will focus on increasing their user numbers as fast as possible or put effort into expanding their digital service offerings, or both.

Regarding financial products, traditional banks still have a competitive advantage and they should focus on making these offerings frictionless and appealing to the younger generations. As the old, heavy bulls they are, they must prove that they can run just as fast as all those lean, shiny unicorns.