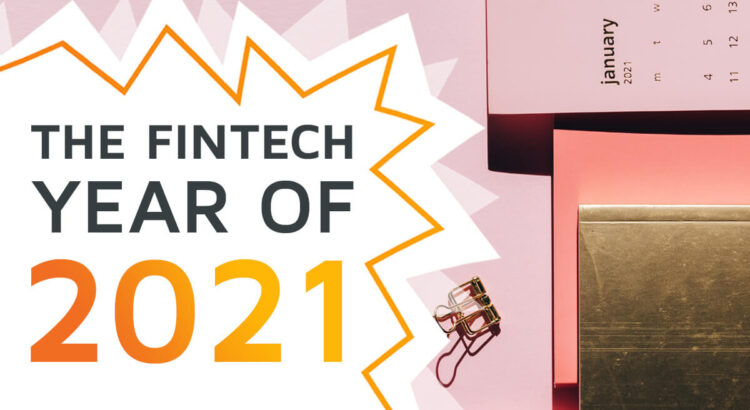 Writing a 2021 recap of fintech has been a tough call. No misunderstandings here: A lot has happened in the industry. But we have gotten so used to the future of payments being both digital and mobile (and some would throw a decentralized in there, too). Long familiar talking points continue rotating in the press:

So what is to write, when we can expect all of this to define the financial industry in the next years? Well, the devil will be in the details: How will those factors play out on the level of specific target groups, use cases or nations? How is the fintech industry holding up as a whole? And what happened in the crypto sphere?

You see, there still is a lot we can talk about…

Starting our recap, we have to speak about fintech as a whole. For the global economy, 2021 had an enduring pandemic, growing inflation and supply shortages in stock. But in the fintech industry specifically, this did not sour the mood. Last year has been a record year for financial technology companies. By the third quarter, worldwide funding of the sector had already surpassed $94 billion – that’s roughly double the amount of investment gathered in the year prior.1 As of now, 151 new fintech unicorn joined the herd. One of the most valuable – Trade Republic, at $5.3 billion – even originated in Germany.

Speaking of which: The German fintech sphere as a whole looks back on a boom year, too. The number of new fintech startups founded in 2021 has increased by 80% compared to the previous year. This brought the German fintech startup count above 1000 companies for the first time.2 The funding totals came out even more promising: Until the end of September, more than €3.2 billion were invested in German fintech – more than in the entirety of 2019, the prior record year.3

Fintech is not just a talking point – it’s a dynamic industry promising to initiate transformations worth high investments.

“Buy Now, Pay Later” (BNPL) continues to be one of the prominent topics in the financial industry. It started out big in 2020, when the pandemic forced consumers to stay at home.

In 2021, the trend continued – at least regarding transaction numbers and adoption rates. Fintech enterprises like Klarna, Square (now Block), Affirm and trusty PayPal lead the way in this regard. Some of them used the year to sharpen their BNPL profile even further: Square acquired the Australian company Afterpay. PayPal has stated its intent to do the same with the Japanese Paidy. And Apple and Mastercard are looking into it, too. 4

Yet, “Buy Now, Pay Later” would not be that much of a game-changer, if digital shopping platforms didn’t want to play. And they very much do, adopting BNPL left and right! Online Marketplaces like Amazon embraced providers like Affirm, Klarna and Zip and just recently teamed up with Barclays to build a BNPL solution for UK customers.

Customer behavior with BNPL services is also an interesting field to look at. Customers increasingly use BNPL as a payment method for convenient everyday shopping in 2021. During the Black Friday sales period, the volume of BNPL purchases quadrupled compared to the year prior.5 On the other hand, as CNBC stated, people who are 65+ years virtually don’t use BNPL at all.6 That said, the dynamic speaks for itself: “Buy Now, Pay Later” is expected to skyrocket during the next years: A study of Juniper Research estimates a transaction volume of $995 billion by 2026.7

The Flipside of BNPL

However, BNPL’s fragilities also peeked out between 2021’s growth records. Profitability is still a long way off for providers, while at the same time, regulators are closing in. This led to a hiccup in the stock market when the stocks of major BNLP players dropped significantly in mid-December. The reason: The U.S. Consumer Financial Protection Bureau opened an investigation into the business of Affirm, Afterpay, Klarna, PayPal and Zip. It demanded the companies disclose information regarding their data-collecting practices and possible financial risks for customers.

The danger of customers entering an invisible debt spiral was pointed out by experts, too, during this year: By the end of October, the UK populace had already accumulated over £4 billion in BNLP-related debts.8 Thus, in the coming years, we may see lawmakers fencing in “Buy Now, Pay Later” services and companies. This may cool down investments a bit further.

Now, let’s recap the next thing fintech enthusiasts have kept talking about in 2021: Super-apps. Super-apps bundle a huge variety of different services and products – all grouped under the roof of one application. Typically, those services are provided by third parties but presented and curated by the tech company running the super-app.

Super-apps are a common way of organizing one’s daily life in many parts of the world already – to the point where they act as the de-facto gate to the internet. They are especially prominent in the Asian-Pacific region: China’s WeChat and India’s Paytm are obvious examples. They also have a strong user base in Africa, the Middle East and Latin America, with apps such as Gozem, Halan, Careem, Rappi, OMNi etc. In fact, 2021 was an abundant year for African super-apps,9 cementing the region as a dynamic, mobile-driven market, comparable to that of China.

For the Western markets, 2021 saw some fintech, (social) media and e-commerce companies take first steps towards what might become an American or European super-app environment, sometimes under different names. Facebook’s own name change reflects this, for example: Meta – really just shorthand for the concept of the virtual-reality Metaverse – is planning to create a super-app platform, dressed in a 3D VR environment.

Another name change indicates similar ambitions: Jack Dorsey’s Square renamed itself to Block just after stepping down as a Twitter CEO, probably preparing the app to expand the services it already offers.10 Klarna has dedicated itself to a similar goal. They have released an app that combines online shopping with payment processing – and was promptly attacked by customers, regulators and privacy groups due to data protection issues.

Despite regulatory backlashes like those, we will likely see more super-apps taking root in the Western market in the near future.

Speaking of regulation: In September, the US Securities and Exchange Commission (SEC) upset the booming neo-broker market. They looked into Payment for Order Flows (PFOF), considering banning them. Just two months later, the European Securities and Markets Authority (ESMA) moved forward on amending the Markets in Financial Instruments Regulation (MiFIR), announcing the same investigation of the matter.

As PFOF plays a key role in their business model, zero-commission neo-brokers like Robinhood or E*Trade are in upheaval. “Zero-commission” means that the broker will not charge customers for the administration of brokerage accounts and can keep execution fees low. This is possible by routing customers’ investment orders to third-party market makers, who execute the orders. The neo-broker receives a fee from the market maker, who earns a share of profit from the trade. The customer benefits from their trade, too, so everyone wins.

Well, not quite. While the neo-brokers could use this model to reduce commission fees for customers, many don’t actually do it. What’s more, the practice incentivizes neo-brokers to route trade to the market maker with the highest fee opportunities. The market makers providing the best service for customers fall short.

Regulators of the ESMA made clear that this is not proper in the sense of best execution. Online brokers acting on a client’s behalf should not receive any kind of monetary or non-monetary compensation from third parties for passing on clients to them. In the UK, PFOF is already forbidden and we can expect the EU and the US to follow through with this as early as 2022.

How About the Crypto Sphere? NFTs, El Salvador and the Metaverse

In 2021, cryptocurrencies continue towards general acceptance (as they did the year before, just check our last recap). Yet, they are still being watched warily by many governments. El Salvador came out to be the big exception here: In June, president Nayib Bukele announced that Bitcoin would be accepted as legal tender in the country.11 While many crypto fans celebrated the step, the implications for the country’s financial system have yet to show themselves and experts are alert.

Aside from that, three letters drove the conversation in the crypto sphere more than anything else: NFT.

NFTs or Non-fungible Tokens are tradeable, unique tokens on the blockchain. They act as certificates of authenticity and ownership for digital content – most typically artworks, photos, videos, music or in-game items. This year, we saw a genuine hype play out around such items. The Nyan Cat GIF selling for over $560.000 in Ethereum in February just marked the overture for a series of high-flying NFT auctions. Soon, we saw the first tweet of Jack Dorsey changing owners for nearly $3 million and Beeple’s NFT-based artwork “Everydays – The First 5000 Days” reaching $69 million at Christie’s – at an opening bid of only $100.

Since then, NFT auctions have gained traction with artists and investors – and even celebrities like Snoop Dog or Quentin Tarantino have offered NFT art for sale. Yet, that’s just one dimension of NFT as a technology: In the future, NFTs will likely play a role in handling the ownership of property in the Metaverse. Sandbox environments like Decentraland or Sandbox.io already use NFTs for this purpose.

And What Did We Do – The trimplement 2021 Recap

At trimplement, we look back on an exciting and work-heavy year.

The online payment boom created demand. And we delivered, continuing work with our clients on shared projects and expanding and improving the products we built for them. One significant milestone was the rollout of a payment platform in almost 30 countries for one of our customers. Overall, our CoreWallet and our custom-built technology are becoming ever more central parts of our customers’ online payment infrastructures.

We are also happy to announce that we grew as a team, increasing our national diversity even further. The trimplement team now includes software development experts from three continents: Europe, Africa and Asia – fittingly, the continents where CoreWallet-based products are live, too. In summer, the COVID-19 numbers in Germany were low. That allowed us to meet up with the whole team for a cooking and barbecue event – PCR-tested beforehand, of course. It was a blast to see each other again after months of almost exclusively working remotely.

Similar impressions were described by our co-founder Natallia Martchouk when she physically attended the Money20/20 Europe convention in Amsterdam in September. It’s just a more wholesome way to connect and stay at the pulse of the fintech industry. f

And that’s what we will continue to do in 2022, too: Be “out there”, expanding our business network further and enabling complex fintech projects for and with our clients. For CoreWallet, we will get things moving in new dimensions, as well – and that’s not just a figure of speech, you will see.

Stay tuned for more news from us: If you want to remain up-to-date on our activities and articles, consider subscribing to our quarterly finfinity newsletter.

But above all else, have a successful and healthy 2022!

Make it your year!