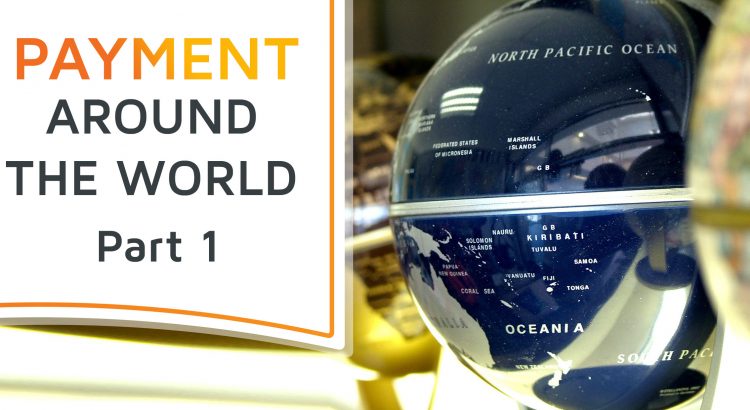 Since those times, worldwide payment habits have aligned with each other a bit. But technological disruptions have different impacts in different countries. And the global financial system cannot complain about a lack of disruptive tech.

The world of payment methods and money transactions is a world of disparities, and it has always been. In the 11th century, banknotes were already common among the Chinese. Europeans did not even think of abandoning their coins.

Especially mobile and online payment solutions are about to conquer the world. The World Payments Report 2018 by Capgemini and BNP Paribas predicts an overall Compound Annual Growth Rate growth of 12,7% in digital payment until the year 2021. In the developing markets, this number will be even higher, surpassing 21%. Then again, in quite a few countries, payers still stick with what they know – most likely: cash.

So, what payment methods do people in different parts of the world prefer? And are there chances for growth as an onal payment business? Let’s spin that globe a bit and have a look.

Where to start a journey if not at home? Before big parts of the EU converted to the Eurozone, many different payment systems and currencies were in place. And some still are: Out of 28 EU countries, 19 countries use the Euro as their single currency. But even within this monetary union, payment preferences differ starkly.

Take Germany, for example. For periodic expenses like rent, insurance and contracts, direct debit is the norm. But when it comes to nearly everything else, Germany long bowed down to King Cash. In 2017, most transactions still were cash transactions, according to Deutsche Bank. Direct debits and credit card payments placed a distant second and third, respectively. This trend has turned around only recently, with cards having become the most popular payment method in the retail sector in 2018.

Jumping over Germany’s Western border, the picture has looked like this for a while: In France, in only half of the payments enacted, coins and banknotes change hands. Rather, the French rely on their trusty credit cards. Also, mobile payment systems are starting to conquer even the smallest shops and people have adopted digital payment quickly. Lydia and Lemonway rank among the more successful providers of such services.

Looking further north, beyond the Eurozone, Sweden stands out as a country, where cash payments are decreasing faster than anywhere else in Europe. The Swedish people count on credit and debit cards to pay for their expenses. The smartphone is definitely the second-most popular payment instrument in Sweden, with the app Swish acting as the great facilitator. Many Swedes don’t even bother carrying physical Kronen around at all.

In Hungary it’s quite the opposite. Hungarians make sure to have enough Forint at hand when they go about their purchases. In online retail, it’s also perfectly common to pay via cash on delivery. One country away, in Croatia, digital wallets already undertake the lion’s share of payment in e-commerce.

These examples show, just how challenging it is to paint a coherent picture of the European payment landscape. Nonetheless, fintech and payment businesses willing to invest in Europe should note a slow but steady tendency towards non-cash payments. Even cash king Germany is moving in this direction. In 2016, cash transactions had a market share of 80%… in 2017, this number has decreased to only 70%, according to Deutsche Bank. Digital transformation can quite be a quickstarter.

If one thing can be said about Russian people, it’s that they trust in cash. As of 2016, around 60% of all transactions involved physical Rubles. But change is imminent, as card-based and fully digital payment methods gain ground. Digital wallets already cover one-fourth of all online purchases – a development advanced through an increase of private cross-border deals with China, the EU, and the US. Contactless payment is also on the rise, with all major banks offering a solution.

The Russian government is more than happy with these trends. In fact, Russian officials are actively promoting it through legislation. For example, the government lowered the cap for cash payments to 300 000 Rubles (around 4000 Euro) and obliged retailers to offer card payments at points of sale.

At the same time, they want to encourage the populace to choose national over international payment providers. That’s why the government launched the national payment card Mir as a counterbalance to Visa and Mastercard. In early 2017, Mir had around 5 million users and is expected to become one of the major players in Russia.

Another Russia-specific method of payment is Spasibo by Sberbank, the only major cross-business loyalty programme. Around 7% of online purchases are paid using points gathered in Spasibo.

So while in 2016, the Russian e-payment market was not considered fully mature yet, it sure has hit a growth spurt since then. Companies like Assist, Chronopay, Qiwi or Yandex.Money are at the forefront of this development.

Just like the Russians and the Germans, Latin America is one of the world’s strongholds of hard cash. And the coin and banknote wielders there even put up a tougher fight, with around two-thirds of the population choosing cash over credit.

Even non-cash payments often have a physical component: Payment tickets are popular in most countries of Latin America, like Boleto in Brazil or the OXXO vouchers in Mexico. Both of them and several others are work together with the local FinTech powerhouse EBANX. And if a Latin American does settle for card payment, he most likely uses a card from a local card scheme, like Naranja (Mexico), Exito (Colombia) or Oca (Uruguay), to name a few. Online payment facilitators like PayPal, Venmo or Stripe don’t permeate the market as readily as elsewhere. They have to deal with fees in several Latin American nations.

In addition, the continent has another problem: Nearly half of the 630 million people in Latin America don’t have a bank account at all. What sounds like bad news for digital service providers, turns out to be a point of attack for fintech companies. At least 70% of Latin Americans possess mobile devices. Thus, mobile payment, provided by purely digital banks, promises banking opportunities for a huge share of the population.

That said, in Latin America, not all nations share the same affinity toward online payment and retail – and in some, the digital revolution is still in the fledgling state. For example, while the e-commerce sector in Brazil grew by only 8%, Peru reached a plus of 198% over the course of 2018.

Additionally, the startup, payment and fintech scene is very self-contained within its respective countries. Companies like Kushki, QVO, Allpago and Conekta are only active on a local scale.

Africa: In Search of Commonalities

Within the wide world of payment, Africa is a two-faced continent. In the sub-Saharan part, over 80% of all transactions are cash-based, as of 2014. This continues to be the case in most rural areas. Local currencies dominate day-to-day business. Cash is even used to bill payments and remittances.

On the other hand – or rather in the hands of the urban elite – mobile payment is becoming another common way of transferring money. African communities rank among the world’s most eager adopters of mobile devices. Many experts view the continent as the cradle of a pay-by-phone revolution, with influential payment providers like M-Pesa and MTN Mobile Money. There are a couple of success stories aside from these two flagships as well, like Zoona, Flutterwave or Paga to name just a few. Non-mobile solutions like the QR code-based Snapscan, Masterpass or even online payment providers like Jumia Pay, Paypal and ApplePay have found their niche, too.

Between these two dissimilar payment situations of largely unbanked cash exchange and mobile-based transactions, traditional banks have a hard time. Currently, retail banking facilitates 38% of the all-African GDP – half of what other emerging markets can muster. Establishing and maintaining a banking infrastructure on the continent is difficult in its own right. This is due to the closed national markets with local currencies and low incomes.

One could say: Banks are late to the party, but it’s on the threshold of taking major leaps within the next five years. In contrast, it’s certainly possible, that the African market will skip the card payment step of financial evolution altogether and evolves from cash to mobile payment straight away.

As we can see, the world of payment is a truly large space. Fintech and banking tech promise to broaden this space, even more, adding a digital layer for consumers and providers. And then there are disruptors like cryptocurrencies, which don’t have physical equivalents anymore. Moreover, they enable digital peer-to-peer payments without an intermediary.

Conceivably, cash transactions will lose their role as commerce enablers, and may even fully disappear, a decade or two in the future. The Digital payment solutions of the world, both online and mobile, offer then unbanked population financial participation. And while big players and even banking houses have already positioned themselves, there is still room for startups and SMEs to conquer specific niches in payment or address specific markets, like payment in IoT environments.

Speaking of which, there are more markets to explore. The other half of the planet will be dealt with in the following parts of our “Payment Around the World” series.

Until then, browse through our other blog articles. Or have a look at our efficient software platforms, which will empower your emoney or cryptocurrency businesses – anywhere on the globe.