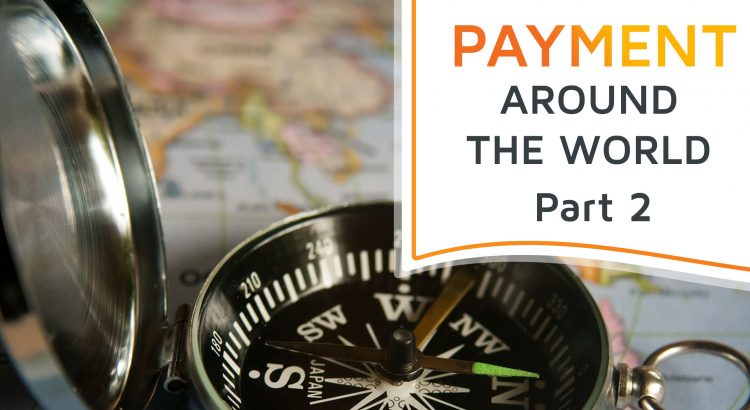 When exploring the payment preferences of the world, you have to go places. In the first part of our article series, those places were Europe, Russia, Latin America, and Africa.

The takeaway: Hard cash dies hard in many parts of the world like Germany, Hungary, Russia, and Brazil. But digital payment services have taken up the fight. They give new options to emerging countries with vast numbers of unbanked people. Mobile access to finances and digital-only money accounts help integrate the unbanked, so they can become proactive contributors to the financial system.

But it’s a large world with a great number of payment landscapes still waiting to be sketched. In this article, we will take a good look at the clashing fintech forerunners USA and China, as well as Canada and Oceania. So, let’s go!

Before the rise of China as a tech challenger – especially as a fintech challenger – the USA have been the unrivaled forerunner in the world of payment innovation. In many fields, they still are: In Forbes’ 2019 Fintech 50 List, a total of 48 the companies listed are based in the United States.

And that’s not the only number backing the claim that the Washingtons and Franklins dominate worldwide payments. The US Dollar is the most accepted currency on a global scale. And concerning credit cards, the question is not if but which American card is most popular in any given country. Add the towering size of the American GDP of 19,39 billion dollars and the technological power of the Big Tech companies in Silicon Valley and you have all the ingredients to cook up payment disruption to feed to the market for another 50 years.

This urge to innovate can be felt within US borders as well. In terms of cashless payments, the United States is well ahead of the worldwide trend. Even before digital-only payment providers came along, Americans have been convicted card payers. Credit cards, in particular, now handle most everyday transactions. The fact that they are so widely accepted gave birth to the half-joking assumption that Americans even pay their credit card bills with credit cards. And who could blame them: Debit cards are not as well-protected in fraud or loss situations. Additionally, most credit card providers offer attractive cash-back programmes, giving financial incentives to their customers.

Saving money is also the main reason why payment via cheque is still a thing in the US. Some providers of direct debit and standing order payments charge fees for their services, making cheques the option to go for, i.e. to pay bills. In absolute numbers, it’s not a huge share, though: Only a combined 8% of payment in the US is done via cash or cheque, according to a study by Wirecard.

Ultimately, the market is trending towards digital payments. As the study above suggests, PayPal concludes 14% of all purchases. That’s hardly a surprise in a country with a high affinity to online shopping. Also, prepaid card payments, like those enabled by MoneyGram, are a growing market in the US. The adoption of contactless points-of-sale and EMV, however, remains under construction, when compared to other countries like China or the UK.

Or when compared to Canada. Americas northern neighbor features POS technology in 80% of its retail stores. Customers appreciate the contactless convenience, as most of them use “bank cards” to pay. In fact, a huge number of transactions in Canada unfold using a debit card.

Of all providers, Interac Direct Payment, introduced in 1993, is the most popular. The popularity of debit is also attributable to the high availability of automated bank machines. Cash falls through for all but purchases with low values.

While neighboring Asia geographically, Australia has much more in common with the Americas in terms of payment culture – and it does a lot of e-commerce both ways. Credit cards are the solid backbone of the Australian payment landscape, with Visa holding a market share of 45,1%. The good old bank transfer is also still popular among Australians.

Banks also take the center stage in online payment systems like POLi, a service provided by the Australian Post. Using POLi, customers can simply pay for online purchases by logging-in with their online bank account credentials during checkout. Another popular option in online payment, which young Australians frequently use is, BNPL or “Buy Now, Pay Later”. BNLP makes it possible to pay for online purchases in multiple installments. For cross-border purchases, PayPal with its payment gateway Payflow outshines its competitors, with a relative market share of 85%.

Just like in many other industrial nations, the number of users who pay via smartphone is rising in Australia. Then again it’s really New Zealand which has outclassed its bigger peer on the field of mobile payments. Cheques are the first victim of this development, seeing their circulation halved in only 4 years.

Credit cards still endure as the preferred way for the New Zealanders to purchase goods. But a significant number of bills are already settled using electronic payment. In general, New Zealand trends toward a society of cashless, fast payments.

Talk about financial technology and disruptions in the payment landscapes of the world: Sooner or later, China will come up. In the last years, this has become almost a natural law. In the Middle Kingdom, innovation in payment moves faster than anywhere else. One reason lies within the unique Chinese market. The Chinese embrace new technologies that promise to make life more convenient and symbolize the newly-gained wealth of the country.

Currently, three companies control most of the payment market. Two of them, AliPay and WeChat, are BigTech companies from the online retail and social media sectors, respectively. They dominate 90% of the market. The remaining 10% fall almost completely to Union Pay, a state-supervised union of Chinese Banks. Other payment providers like Baofu, 99 Bill and YeePay only hold small market shares.

Union Pay is Chinas only credit card provider. But card payments no longer dominate as much as they used to since the rise of big tech. However, Union credit cards still are the most widely accepted Chinese payment method the world market. Union issues out at least 30% of all credit cards worldwide.

But who needs to concentrate on cross-border payments, if you can serve an inland market of almost 1,4 Billion people? The sheer size of this market allowed AliPay and WeChat to scale their solutions quickly. What’s most interesting is that the technology enabling the tech giant’s success has been proclaimed dead in the West: The QR code. QR-based payments are immensely popular with Chinese retailers and customers, as the infrastructure is so easy to provide. As a merchant, all you have to do is to set up a sign with a code. Customers scan the code using specific apps on the smartphone. Both AliPay and WeChat provide such an app, but WeChat recently outstripped AliPay in registered users, offering P2P payments during holidays: The so-called Red Envelope feature.

The fact that the QR enthusiasm doesn’t stop at even the smallest shops and market stands has interesting effects on the circulation of cash. As it stands, there are still banknotes in circulation, but they are becoming less and less accepted as a means of payment.

Conclusion: It’s Neck and Neck in the World Payment Championship

Alright, time for stop before the third stage of our trip around the world of payment. Looking ahead, we expect some interesting financial encounters to dot our route through the Middle East, India and the rest of Asia. And looking back, we wonder who will come out on top in the fintech race: USA or China. Market penetration and utilization of future technologies like AI or Blockchain will likely determine who will take the lead.

China or the USA, who will come up on top? What’s your opinion? Leave a comment below.

And check out our scalable software platforms, which allow you to conquer the world of payment on your own terms.