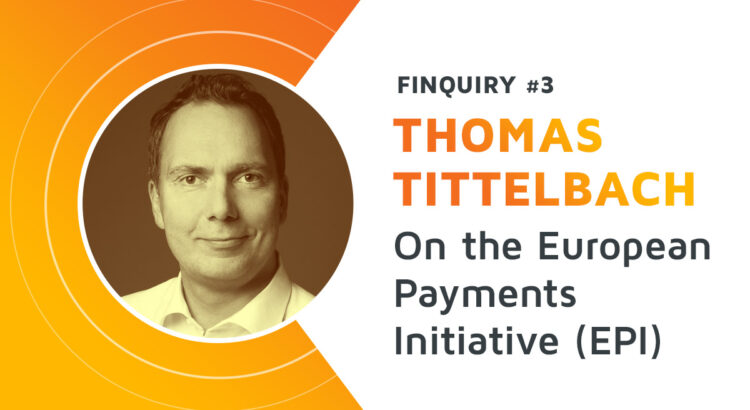 One key goal of the European Union is to establish a unified economic and financial system. Yet, in terms of payment schemes, the Union presents fairly non-uniform today. Regulatory reforms like SCT Inst and PSD2 have only laid the foundations of a profound rebuild of the European financial system. Today, the EU’s financial landscape is still characterized by national payment systems and dominated by US card schemes like Visa, Mastercard and PayPal.

However, while backed by the European Central Bank the initiative is also met with scepticism. For our fintech interview series “Finquiry” we have spoken with payment and business development expert Thomas Tittelbach about the chances, risks and prospects of EPI.

Our interview partner Thomas Tittelbach has been a force in the international payment industry for over 20 years. As a serial entrepreneur, he has co-founded and directed the payment companies omba and Payreto and acted as Head of Payment for Clickandbuy. Currently, he applies his extensive skills in P&L, operations, product and partner management as well as his in-depth knowledge of fintech, payment orchestration and business strategy at aye4fin as a Managing Partner.

Thomas is also a member of the Associate Committee of the CNP Payment Forum.

trimplement: “Thomas, before we get into the details of EPI, let’s look at the bigger picture. EPI was designed as a counter-measure to the influence of payment and card schemes from other parts of the world, such as China (AliPay) and the US (Visa, Mastercard, etc.). In your opinion, how does Europe perform compared with the international payment landscape?”

Thomas Tittelbach:  “Currently, it’s North America and Asia that sets the trends in payment. Europe, and Western Europe in particular, is gradually falling behind. They do not manage to offer a unified solution as an answer to the popular schemes from abroad.

But that’s just one side of the coin. The other is that US products, for example, are developed by Americans from a distinctively American viewpoint on payment. This means that the specific characteristics of Europe or other parts of the world are often not considered. The same is true for Asian products. Chinese solutions have a gigantic number of native users. But taking a look beyond China’s borders and comparing adoption by foreign users puts this in perspective. In Europe, merchants who use AliPay and WeChatPay on a larger scale have Chinese customers as a target group – dm-drogerie markt, a German drug store chain, is one example here. You have a high range of markets in which those big payment service providers play second fiddle. PayPal holds over 370 Mio accounts. And yet it is largely irrelevant in Russia. Irrelevant in Japan. In India, too.”

Thomas Tittelbach: “Exactly. This shows that even the global players are not invulnerable. Their volume concentrates on many markets and they have five to ten primary markets – but beyond that, their presence thins out. I would even argue that in Germany, PayPal is dead. They have saturated the market. And all that’s left to do for them is to keep the market share here, focussing on the high-growth markets elsewhere.

That leaves a niche, of course: If you are determined to build something with a focus on European merchants and end-customers, you might have success – after 4 or 5 years with a few setbacks along the road, but you will manage it, ultimately. The window of opportunity is wide open.”

“If EPI does not hurry, customer niches will be occupied by Big Techs and fintechs.”

trimplement: “But do you think the European Payments Initiative uses this opportunity successfully?”

Thomas Tittelbach: “The question is how they define “success”. Do they adopt the definition of success by Deutsche Bank or paydirekt? Like, will they say: We are on par with PayPal, so we are able to attack them! Or do they set relevant goals like “We want to reach 1 million customers” or “We want to onboard 1000 merchants”? The latter one would be achievable.

If Europe develops a product with a precise and relevant value proposition here, they might have an enduring chance. With a value proposition resting solely with either security or costs though, EPI does not hold a candle to what’s already out there.

It’s correct that EPI touts itself as a “European solution”. But still, it must be applicable on a global scale to meet other payment schemes on eye level. EPI mustn’t isolate itself, saying “we only do Europe”. The product must play on the world stage while being decidedly from Europe. Otherwise, EPI won’t stand a chance. We are not talking about a 20% chance or the like – no chance at all.”

trimplement: “And the competition is not limited to bank-driven payment players only. We have Big Tech companies as aspiring rivals, too…”

Tom Tittelbach: “Definitely! Big Tech tries to dominate all aspects of user interaction. This means they will increasingly involve themselves in payment processing – some already have. That doesn’t have to be successful: GooglePay is not a sustained success. But the Big Techs learn from their mistakes and come back with new, improved products.

And that makes them serious competitors. If EPI does not hurry, customer niches will be occupied by Big Techs and fintechs. We are living in a time where customers don’t care which company offers the service. It just needs to have a good user experience. Simply being the “European solution” has no added benefits for such customers.

Benefits for merchants are factors like bigger reach, secure payment, quicker pay-out… the list goes on. And those benefits have to be offered by a European payment scheme. But the most important factor for merchants would be the reach. They want the maximum number of customers.”

“What we are seeing with EPI, though, is that they want to do everything simultaneously.”

trimplement: “Speaking of reach: Initially, only five EU nations are involved in the conception of the EPI. We have Germany, France, Spain, Belgium and the Netherlands. Yet, EPI aims to become the payment scheme of choice for the whole European Union. Do you think EPI will get the Scandinavian or Eastern European nations on board, too?”

Tom Tittelbach: “Well, if you tried to get all nations on board in the initial phase in which we are now, that would be doomed to failure. Every nation would try to force their own diverging needs and demands into the concept. A start with a lower number of participants makes perfect sense. If the product becomes successful, the other nations will want to follow suit.

What’s important is that you have the product go live within a short timeframe. And to have nations on board, which offer a sufficient market size from the get-go. France, Germany and Spain can provide that – Italy presents a gap for EPI to close soon. On the other hand, the Netherlands contribute and they are very innovative regarding payment and banking. Together, they all cover the heartland of Western Europe.”

trimplement: “Do you think EPI will get off the starting blocks fast enough? Following the official timetable, the proof-of-concept should occur this year, the launch is timed for the first half of 2022. It sounds ambitious.”

Tom Tittelbach: “For a private company, this would be absolutely feasible. If the same is true for the EPI project with its dependencies and involvement of shareholders, we will see. In any case, a short time to market will be important, so EPI can gather feedback and experience early on.

Focussing on limited pilot projects, launching them and expanding the products, based on experience gathered post-launch… that’s the way to increase your chances of success, in my opinion.

What we are seeing with EPI, though, is that they want to do everything simultaneously. That increases the workload, burns too many resources and does not yield significant value. A recent example that followed that approach too, is VeriME. They wanted to do everything at once, it didn’t work out.”

“It’s not enough to just say the right thing – you have to act on it, too.”

trimplement: “And EPI is not the first initiative of this kind. We had similar initiatives in the past such as Monet or payfair. In the end, they did not succeed – this might be one reason for the initial scepticism towards EPI. Do you think EPI will face the same obstacles as its predecessors?”

Tom Tittelbach: “I would say, payfair’s problem ultimately was its small reach. As a Belgian enterprise, payfair did not manage to reach out to the entirety of Europe. Their focus rested on a very limited market segement and not so much on market coverage.”

To become a successful payment scheme, you need a hungry team that is burning and working for their product 24/7. On the shareholder side, it’s more important to establish clear, entrepreneurial decision making and a joint true objective. And the decisions that are made should be informed by real free-market experience and focused on creating a functional product. Right now, the EPI project has a political structure instead of an entrepreneurial structure. The shareholders will pay attention that their existing businesses will not be jeopardized by EPI. Which is another reason why EPI will become very difficult to pull off.

Monet also started with lofty goals, similar to EPI. It was telling that the main representatives had a morning meeting in Frankfurt, one at noon in Paris and one in the evening in Madrid, all on the same day. They were permanently on the road to promote Monet, but to little effect on the product side. I see the same with the EPI-Management team now. Drumming up the business is one thing, but it’s not all. It’s not enough to just say the right thing – you have to act on it, too.”

“Klarna could very well take on the role of EPI…”

trimplement: “Now, let’s imagine that EPI does not catch on… Is there a scheme that could take on its role in Europe in the future?”

Tom Tittelbach: “This is an interesting question. I would say we already have one of the most valuable fintech unicorns here in Europe: Klarna. Currently, Klarna is blooming into a clear rival to PayPal, and to Visa and Mastercard, too. This means Klarna could very well take on the role of EPI, in the years to come.

Concurrently, we have interesting Fintechs like Bluecode, who follow a completely new approach in the development of a European payment scheme. And who are gaining market shares in smaller steps? In the coming years, we will see further providers who hold that potential, especially as the investment market for fintech overheats currently. There is demand, but that EPI in its current shape will meet it, that’s less than certain.

Then again, everyone is nagging at EPI. And while they might have a point, let’s ask: What would have to happen for EPI to become a success story and be around in 10 years? It boils down to two necessities: They must manage to present a convincing vision to cover payment in Europe and beyond. And they must have a product to match the vision. Then they can outrun payment providers like PayPal and Klarna.”

trimplement: “Thanks for the interview, Thomas!”