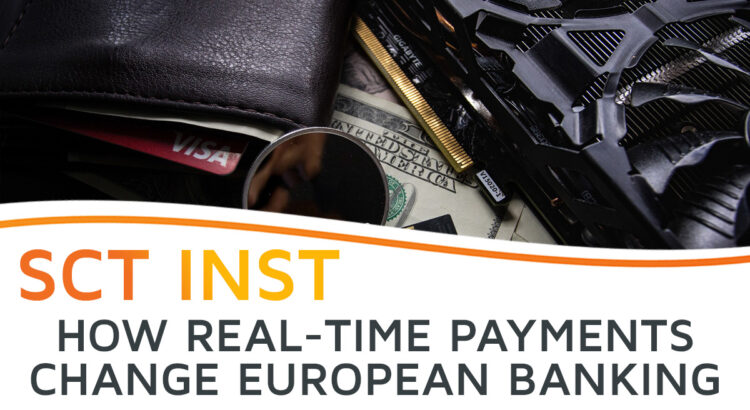 The SCT Inst scheme was introduced to enable rapid, real-time payments between banks and financial institutions located in different European countries. As such, SCT Inst acts as a stepping stone for more banking projects bound to happen further down the timeline (like the European Payment Initiative or EPI).

As you are reading this, SCT Inst has already taken hold in banking. But still, banks can feel the challenges it has presented to them.

Let’s see what we are dealing with.

What is SCT Inst?

SCT Inst stands for SEPA Instant Credit Transfer scheme. It was introduced by the Euro Retail Payments Board (ERPB) in order to enable rapid electronic payments within the eurozone. In a nutshell, SCT Inst facilitates an instant or near-instant clearing of a transaction between originator and beneficiary. The scheme is able to credit a sum up to €100,000 into the account of the payee and give a confirmation to the payer within a maximum time frame of ten seconds.

How SCT Inst Came to Be

Before SEPA Instant Credit was introduced, instant payments already existed in several countries but were confined within each of these countries’ borders. This resulted in a fragmented European payment landscape. At the same time, customers had many alternatives for instant payments at hand, with PSPs such as PayPal or Google Pay offering them.

Thus, “the initial request for this pan-European instant credit transfer scheme came from the Euro Retail Payments Board and not directly from the customers themselves”, said Jean-Yves Jacquelin, Chair of the EPC Scheme Evolution and Maintenance Working Group in an interview published by the European Payments Council. In 2016, the EPC acted by establishing an Ad Hoc Instant Payments Task Force. This panel contained representatives from all over of the European Union charged with setting up a feature catalogue for the upcoming SCT Inst scheme, which the EPC Board then reviewed.

The result of this process became the foundation for Version 1 of SCT Inst. This version was launched in 2017 and allowed a maximum transaction amount of €15,000 per transfer. As of July 2020, the ERPB extended the transaction limit further to €100,000.

SCT Inst presents a solution to the challenges that payment service providers like PayPal impose on banks. Formerly, those PSPs had a distinct market advantage: They always allowed instant payments between consumers and merchants and spared their users details like clearing times. In contrast, with traditional bank measures like direct debit or bank transfer, customers had to wait at least one day until merchants had received the incoming funds. Only then, they would send out ordered physical or digital goods. In case of weekends or other bank holidays, customers and merchants had to wait even longer.

SCT Inst changed that for European banks, but also put them under pressure: Banks needed to implement the new scheme in order to remain competitive and not lose their stake to other players. Additionally, banks were confronted with large external demand from one particular type of client: Businesses, for which instant payment is an interesting measure to exhaust their own liquidity by paying inter-European invoices literally in the very last minute, instead of 2-3 days before the due date. With the recent increase to €100,000 it’s even more certain that SEPA Instant Payments will be taken for granted in B2B in the future.

Of course, getting ready for SCT Inst didn’t come without challenges, some of which still affect PSPs.

The Challenges of Switching to SCT Inst

In the early days of switching to SCT Inst, most banking functions, like treasury or liquidity management, were still bound to batch processing and not prepared for permanent availability. Even if the transaction made its way into the system, the likelihood of a delay was still large: the core banking system might have been unavailable due to performing other scheduled tasks in its daily processing cycles, like interest calculations.

Plus, the heterogeneous IT landscape was not easily updated; there was always that one tool that could not be updated yet, or that one nightly SQL job that had not been touched for years.

Challenges such as these called for a mechanism which allowed payment service providers participating in the SCT Inst scheme to process transactions immediately and regardless of the availability of other systems in their infrastructure.

Deloitte proposed three possible approaches for PSPs and banks to overcome these challenges and technological prerequisites:

Which path to take must be decided on a per-case basis. But they all require a system which is capable to process a large volume of transactions at any time. Many legacy systems still used in banking struggle with batch processing and nighttime transaction handling.

Whatever route towards “Destination SCT Inst” your company or association chooses, we can provide a well laid-out foundation to walk on.

CoreWallet is a scalable, secure and flexible ewallet and virtual account management solution. One centrepiece of the software is its powerful accounting module which can act as a sub-ledger to keep track of creditors and debtors. In addition, CoreWallet has a reconciliation engine built-in which allows allocating transactions based on transaction parameters, like IBAN, BIC or a payment reference. The allocation into virtual accounts provides real-time insights important for liquidity planning and fraud protection, and its payment approval process allows to manually intervene if certain thresholds are exceeded.

In contrast to a number of legacy banking systems that often are not constructed for high-volume, synchronous transactions, the CoreWallet software foundation is build for scalability. As such, CoreWallet is perfectly suited to accept transactions in real-time, day and night, be it as a certified payment hub like in Approach 1, a separate payment chain dedicated to SCT Inst like in Approach 2, or enhancement of a legacy systems back-end, as seen in Approach 3. CoreWallet’s accounting module can be configured to support both types of instant transactions:

Perhaps most importantly, however, with the SCT Inst scheme already adopted by a number of banks: CoreWallet is all set for banks wanting to move away from legacy systems, running on internal data centres, towards systems operating within the cloud. In the future, banks and PSPs not offering cloud-based banking and payment will find themselves left behind.

And that is not the only thing that will keep these actors busy in the near future.

When imagining the picture of a unified, European payment landscape, the SCT Inst scheme is only one piece of the puzzle. But now that it’s on the table and instant cross-border transactions pass easily within the eurozone, it’s possible to attach a new piece.

As early as 2008, with the start of the Monnet initiative, the European Central Bank has driven financial institutions to establish a new pan-European system for cashless payment. The goal: Make all cashless payment, from digital payment to credit card processing to ATM machines operate within the same unified system. This shall provide a counterweight to Visa, Mastercard and tech giants like Google, Apple, AliPay and Tencent, who have a huge influence on how money is exchanged within the EU.

After more than a decade of restructurings and rebrandings – fancy PEPSI, anyone –, this endeavour is now pursued by the European Payment Initiative (EPI). As of now, 16 European banks and financial institutions have joined the initiative, BNP Paribas, DSGV, Caixa Bank and Unicredit among them. Rudiments of the German-only project Digitale Kreditwirtschaft (#DK) has also been folded in the EPI and Deutsche Bank, Commerzbank and DZ Bank now work with the initiative among others.

So, after SCT Inst has been proudly established, the next big banking project is already in the pipeline. Banks and PSPs in Europe are not done setting up new, border-crossing systems and polishing their digital payment services.
But as long as they can rely solid foundations to put their payments upon, it’s going to come to a stable conclusion.