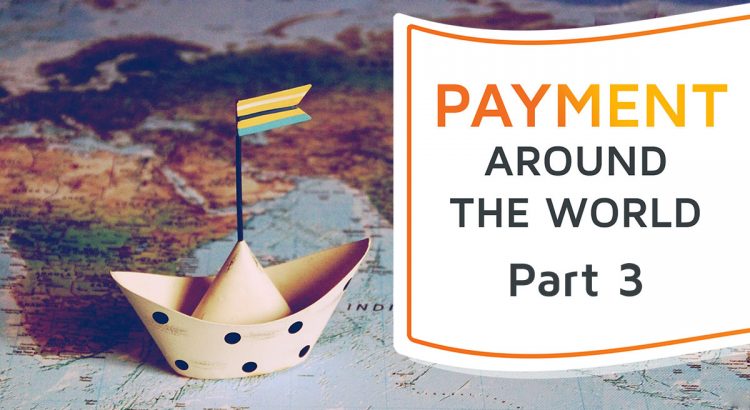 Payment around the world – where were we? In the previous articles of this series, we devoted ourselves to different payment landscapes of the globe. And with the trends and challenges, we found there.

But no matter which region we looked at: All of them stood on the verge of digital transformation or have crossed that line. China and the USA press ahead in terms of payment innovation, as we have seen in our second article. In other countries, digital payments are still in the process of taking hold in the populace. The changes they bring have already become apparent. Digital payment services play the role of an equalizer, especially for the unbanked people. Developments in Africa‘s and Latin America’s payment landscape, as detailed in the first article of this series, stand as an example for this.

We will see if those tendencies manifest in the last waypoints of our journey, too. So, let’s move on, shall we?

What we discovered about the Chinese market in Part 2 of our series doesn’t necessarily apply to the rest of the Asian region, even though China makes its presence felt in the region. As a whole, Asia is a very fragmented payment market, although we can record a few overall tendencies.

Like almost everywhere, the smartphone acts as the foremost instrument of financial disruption in the area. This gives rise to some very interesting payment systems. Take InstaPay in Indonesia for example, which allows small enterprises to accept payments via WhatsApp. Or the Japanese messenger company Line pursuing the path of WeChat and Apple, offering payment services and its own credit card.

The second major tendency puts the Asian market in line with the rest of the world. Cash still accounts for a large share of purchases, but it’s on retreat. The economic wealth of a nation doesn’t indicate the affinity towards cash in Asia. For example, physical Yen dominate 70% of all transactions in Japan. Just across the Japanese Sea, the picture changes dramatically: South Korea has one of the lowest rates of cash preference worldwide. Buyers prefer debit cards and credit cards over coins and banknotes there.

In terms of digital currencies and tokens, Japan is open for experimentation, however: The Mizuho Financial Group has announced a digital currency called J-Coin to launch just in time for the Olympics 2020 in Tokio. Designed as a stablecoin pegged to the Yen, but without relying on the blockchain protocol, J-Coin is expected to boost the digital transformation of financial services. This will simplify payment for amenities during the Olympics for international guests. Payment will be possible via the “J-Coin Pay” App. Mizuho already entered cooperations with around 60 other financial institutions to make sure that payment via “J-Coin Pay” will become a widely accepted service.

The number of unbanked people in Asia also finds expression in the local payment landscape. Singapore and Malaysia have a relatively high number of banked individuals, which plays out in favor of credit card payments. Vietnam and the Philippines have more unbanked people and lower credit card penetration. Yet, all countries embrace the opportunities of digital payment in their very own ways. Singapore is the fintech hub of South East Asia and catching up on China with the QR payment provider Nets and the mobile wallets PayNow and Dash. Indonesia positions itself firmly with its payment unicorn Go-Jek, while the Malaysia company Touch ‘N Go brings in the Chinese Alibaba subsidiary Ant Financial to create a TNG wallet.

Asia is bubbling with payment innovation, which can also be a problem, however: Once wallet and payment providers set out to conquer the markets in other countries an oversupply of wallet systems could actually limit adoption.

Bordering the diverse markets of East Asia, India leaves even China behind, regarding the sheer economic growth rate. And where new markets emerge, new, disruptive ways of conducting payment are often in high demand.

This is the case with India at the moment, as the country transitions from a largely cash-based society to a more digitally-inclined one. The government of India encouraged the step towards digital payment with a harsh step in November 2016. Without much discussion beforehand, they called 500- and 1000-rupee banknotes invalid. Officials mentioned fraud prevention to be the main reason for this step. But they have since admitted that kick-starting a cashless society has been another incentive.

In the end, it worked out. While the government soon replaced the invalid cash with new 500- and 2000-rupee notes, the policy triggered a change in thinking. Until then, 97% of transactions had been done via cash. When the banknotes in question lost their worth, the Indian population searched for alternatives. They found them in disruptive, new mobile payment methods.

As such the demonetization marked the breakthrough moment of the UPI payment system, issued by the National Payments Corporation of India. It enables users to transfer money between different banking providers. It also acts as the underlying technology of mobile Payment solutions. Nominally these are services like Google Pay and WhatsApp Pay and QR payments, which spread across India with the same momentum as in China. In fact, the proportion of digital transactions in the economy has tripled to 7% of the GDP in the past 3 years.

Still, the majority of the Indian populace remains skeptical towards digital payments. That means that cash has made a quiet comeback since high-value banknotes are available again. Credit cards have a strong foundation within India, too. While the Reserve Bank of India has stated, that the number of newly issued debit cards has declined by 39.8 million to 884.78 million, many Indians prefer credit cards. Around 47.99 million credit cards are in operation right now.

All in all, India has only taken the first steps towards a fully digital payment society. But thanks to a booming space of payment and digital finance challenger such as PayTM or MobiKwik, the foundations for this development stand firmly.

The Middle East meanders between tradition and modernization. Currently, it benefits from the mass distribution of mobile devices, just like Africa or Asia do. This development falls together with the emergence of a new middle-class. A class, which became aware of international trends and now demands fast and cheap payment methods. Pair this with the facts that many of the region’s countries are located at the upper end of the economic growth curve and that the average population is very young – you’ll end up with ideal conditions for financial disruption.

But how do these conditions express themselves on the actual payment market of the region? In fact, many countries of the Middle East still run on cash. Credit and debit cards act as an alternative. However, they often are used to simply withdraw cash. And card-based payment faces one additional problem: Islam forbids receiving or paying interest of any sort. To still offer such services, banks give out specific Sharia-compliant credit cards.

Establishing mobile and online payments in the region is no easy task either. Many Middle Eastern users meet such payment systems with skepticism. Inhabitants of the United Arab Emirates have the highest affinity towards online payment, with 71% speaking out in favor of it – that’s 20% ahead of most other Middle-Eastern countries. Overall, experts estimate that the total volume of online in the region payments will increase to $69 billion by 2020.

Additionally, there are fewer incentives for local buyers to change their payment behavior. The Middle East generally lags behind in e-commerce when compared to other regions of the world. High smartphone penetration and a largely urban population don’t help if new buying environments don’t encourage people to rethink their payments. As such, most online transactions are paid with cash on delivery (provided by PSPs like Payfort) or with credit cards (e.g. via MEPS) beforehand.

Nevertheless, it would be wrong to dismiss the Middle East as a region which has lost the pace. It’s true that it has not yet grown up to its full disruptive potential. But with card and cash payments, most unbanked people in the region get left out in the cold. The Middle East benefits from an exceptional smartphone penetration. This gives fintech companies and payment providers attractive leverage points to distribute their services. The United Arab Emirates spearhead the digital payment movement in the Middle East – the Emirates NBD push towards payment via WhatsApp is just one example.

At the Payment World’s End

And there we are, around the world in three articles. It’s possible that we might have missed a stop or two, though. If we did, feel free to leave a comment with some “travel advice”. In further articles at a later time, we might also look into specific areas of international payments.

And perhaps your business is preparing for its own journey to new, international markets. When you do, make sure that your payment software is all set up for your chosen country’s regulatory and technical requirements. As consultants and providers of battle-proven software foundations, we are eager to help. Our products are in use in several, international payment enterprises.

Feel free to have a look at our solutions and our references, to get a better grip on our proposals. We look forward to hear from you.